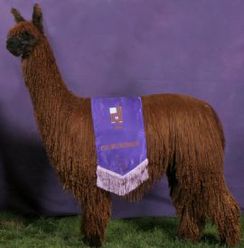 He’s listed as Bay Black, but in full fleece his fiber is a darker brown. We’ve had some wonderful yarn made from his fiber. He is definitely the ‘alfa-male’ in our boy’s barn in that he keeps the younger boys in line.